You have an idea, perhaps a brilliant business venture, a life-changing gadget you thought up, or a new app for your company. You are excited about the possibility of the project but you start getting stuck in the details of how exactly it should look and work. You try to anticipate every needed feature and function. You are trying to make the perfect project—stop!

It is easy to get caught up in the pursuit of perfection, mulling over the smallest details over and over without ever executing the project. After six months of planning and planning, we end up with nothing to show for it except a few documents, sketches, and prototypes. After twelve months you may have something useful and even good, but not perfect so you don't launch—stop!

Your project is no different. In your insistence and quest for "perfect" you deny from your customers, clients, and coworkers something that could be very good to them. You must continually ask yourself, "Is what I have created at this stage a usable product for someone and will it help them in some positive way?" If the answer is yes, launch it.

How Do You Overcome the Stagnation of Details?

It may sound scary, but we have a very clear solution. Launch early and often. There have been many instances where someone just went with a good idea and it took off to extreme success.  Their initial launches weren’t perfect, or even aesthetically pleasing for that matter, but their good idea was more than enough. The fact that they did the work and put it in the public eye before anyone else had the same idea or application made a big difference in the success of the idea. The goal is to develop your project to the Minimum Viable Product (MVP).

Take SnapChat for example. The concept is simple: send and receive photo and video messages that disappear after 15 or so seconds. What makes SnapChat unique is that it capitalizes on the idea that some things we just don’t need (or want) to have a digital record of forever. So, when founders Bobby Murphy and Evan Spiegel had the idea, they didn’t waste any time in launching. SnapChat now boasts billions of messages sent a day.  They even turned down Mark Zuckerberg’s offer to acquire the company. Facebook then launched a nearly identical app called Poke days later, but because SnapChat was the first to market, Poke didn’t make a dent (pun intended) in SnapChat’s success.

How about Plenty of Fish? Founder Markus Frind came up with a dating service that was different from the rest; it was free. Frind mastered the art of SEO and quickly grew from 40 members to 10,000 between March and November of 2003. Capitalizing on ad revenue early on, he is able to offer a free service to users while raking in $10 Million per year. Is another online-dating site revolutionary? Does the site have the best design? Has it changed much at all in over a decade? No. But it works. And it’s the #1 dating site in the US, UK, and Canada.

And then there’s the ultimate "good" not "perfect" MVP example: Craigslist. Brilliantly simple, what started as a way to post upcoming arts and music events in San Francisco quickly evolved into the online classifieds forum we know today. It looks the same as it did in 1995. And it’s not the prettiest thing to look at. But it does its job, and we all use it.

What's the Best Processs to Get to the MVP?

Okay, so you’re ready to dig in and get to work. You’ve got an idea for an application for your company but you don’t know where to start.

Where to begin? Enter Agile, a methodology we at Envoc use to develop our custom software and websites. Its whole premise is based on action: breaking the work down into phases and handing in deliverables every two weeks. Planning is executed on the deliverable at hand. Instead of spending a few thousand dollars planning for seven months without any product to show for it, Agile gets you developing the product immediately, refining, revising, and planning for the features as they are executed. You have deliverables every two weeks, which allows you to adapt, overcome, and respond. In this style of delivery, you can work toward a MVP that makes and keeps users happy. See this great visual of the difference between questing for perfect, and delivering a viable product: 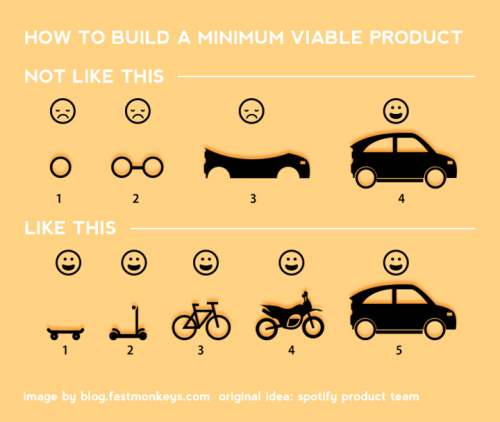 The idea isn’t perfect from the get-go? No problem. Agile not only anticipates change, it expects it. Changing, adding, or even dropping features is expected and does not result in a trip back to the drawing board.

So don’t be scared. We’ll walk you through it. We have an in-house, Addy Award-winning graphic department that creates all the branding and graphics needed to make your customer-facing site or internal application beautiful and eye-catching (it won’t look like Craigslist.) Plus, we’ve got a stellar team of developers here to create the piece of software that, at this point, you’ve only dreamt about.

What are you waiting for?

Use our Project planner to get started

Why Should You Hire a Professional UX Designer? Next Post QA Role in Product Advocacy Previous Post

Putting the “Kick” Into Kickoff Workshops

Kickoff workshops are one of the most important parts of the Envoc Experience. We decided to ditch stale, boring, presentation-style meetings and replace them with fun, collaborative, get-up-out-your-seat activities that pull the team together and launch a project [...]

Help us understand your vision by providing a few pieces of information about your upcoming project(s). Having this information prior to our initial call will help our staff understand and meet your goals, and provide you the best solution [...]